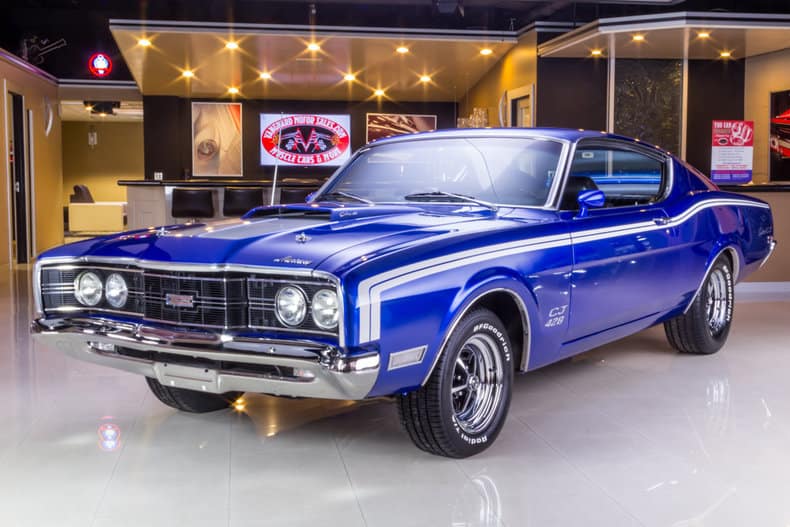 Mercury may have had identity issues during its early years, but it found a place when it released the ’69 Cyclone. Offered with the option of a Cobra Jet engine only in ’69, this model and option are the king of the Cyclones. Once again in typical American muscle style, a big block engine was thrust into a midsize car – and boy did it fit just right. The shadow of older brother Ford wasn’t so big anymore.
The kit on the CJ included the 428 Cobra Jet engine breathing through dual exhausts, a close-ratio four-speed manual transmission along with the Competition Handling Package. With performance axle ratios of up to 4.30:1 available, the CJ’s prowess opened many eyes to Mercury’s performance potential. This meant around 335 HP and 440-lbs.ft. of torque in the CJ (a number many consider underrated by Ford). Additionally, the Cobra Jet engine featured an even better compression ratio and a Holley four-barrel carburetor. All in all, it was enough to propel the 3,825-pound car through the quarter-mile in less than 15 seconds at a speed over 100 MPH. This confirmed it, there was a legitimate alternative to a Hemi Charger.
Engine: 428 Cobra Jet V-8 – Top speed: 116 mph –
Quarter mile time: 13.8 seconds – 0-60 mph time: 5.5 seconds
Advertisement
Back
Next