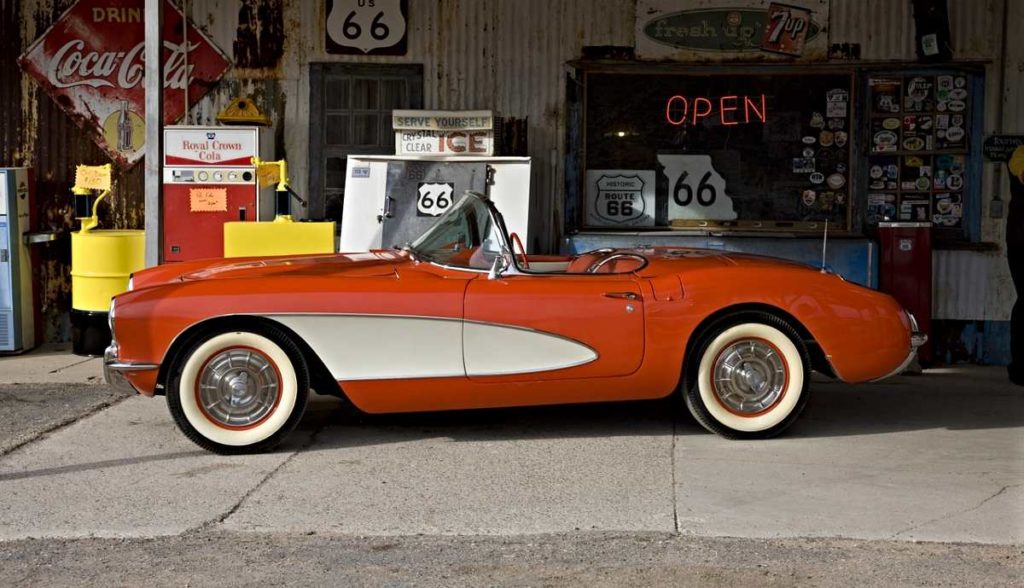 The first Corvette concept was shown as a “dream car” during General Motors Motorama in New York’s Waldorf’s Astoria Hotel in January 1953.

Zora Arkus-Duntove, who the Automotive Hall of Fame has deemed “The father of the performance Corvette” was an engineer for Chevrolet. He first saw the Corvette concept at GM’s 1953 Motorama. Arkus-Duntov loved the design but was disappointed with its power. He wrote to Chevrolet’s chief engineer Ed Cole about his admiration for the vehicle as well as a technical paper how to improve its performance. Chevrolet was impressed and hired him right away to work on the project. Arkus-Duntov continued to work on Corvettes for the next 20 years.

Myron Scott, the creator of the All-American Soap Box Derby, worked for Chevrolet as the assistant director for the Public Relations department. In 1953, the company was seeking a name for its new sports car that started with “C.” Scott proposed the name “Corvette” after the high-speed pursuit ships in the British Navy.

In 1956, the Corvette was remodeled to include exposed headlamps, sculpted side covers and rolled up windows as well as an optional factory-installed detachable hardtop.

1960 was the final year that Chevrolet included weighty grill “teeth” and tail lights that shaped into the rear fenders.

The C1 generation of Corvette lasted from 1953-1962. Since the C1 models did not include independent rear suspension, these Corvettes are often referenced as the “solid-axle” generation.

The Chevrolet Corvette (C2) was the second generation of Corvette that lasted between 1963 & 1967. The initial design for these vehicles was based on GM Vice President of styling Bill Mitchell’s 1959 Sting Ray Racecar.

A new coupe edition of the Corvette Sting Ray debuted in 1963. Production was almost divided equally between the coupe and the convertible styles, though the coupe style did not sell as well until the 1969 model.

The 1963 Corvette coupe body style was the only model to include a split rear window. Removal of the design occurred in 1964 due to interference in the driver’s rearward vision.

According to the Corvette Museum, energy-absorbing steering column, four-way hazard warning flashers as well as a dual master cylinder brake system were standard features in the 1967 Corvette Sting Ray.

The C3 generation was meant to begin in 1967, but Arkus-Duntove delayed it wanting more time to fix aerodynamic issues in the wind tunnel before pushing it into production. Despite the problem, the 1967 Corvette Sting Ray did include removal and retooling of the exterior trim fender vents and the hood of the vehicle

The Chevrolet Corvette (C3) generation lasted between 1968 & 1982. It remains the longest generation of Corvette thus far.

The Mako Shark II concept car inspired the 1968 C3 Corvette redesign. The Mark Shark II was introduced in 1965 and carried on the Shark 1 legacy of sporting blue/gray on top paint scheme.

Some of the 1968 C3 Corvette restyle features included a headlamps “pop-up” design and removable “T-top” roof panels for coupes. The coupe was also fashioned into a notchback fitted with an almost vertical removable rear window. The “Stingray” nameplate appeared on front fenders, the cars were fitted with 8-inch-wide steel wheels, and the front grilles were made black.

Chevrolet orchestrated the 1971 production of the Corvette as an expansion to the 1970 model since the 1971 version included minimum additions.

The 1972 Corvette was the last model to include chrome rear and front bumpers, side-fender grills as well as an egg-crate grill.

#30 – Introduction Of The Catalytic Converter

The 1975 Corvette was the first model to include the federally mandated catalytic converter and only took unleaded gas. The converter is an exhaust emission control that transforms gasses into less-toxic pollutants. As a result of these additions, the 1975 Corvette could only reach 165 hp (the lowest speed in the C3 generation) unless customers purchased an L-82 engine. (Not all vehicles featured in the image above are 1975.)

1975 was the last year Chevrolet included a convertible edition of the Corvette in the third generation. The company expected more safety restrictions and thought that this would be the last soft-top model they manufactured. Chevrolet, however, returned convertible Corvette in 1986.

The 500,000th Corvette came off the production line in St. Louis on March 5, 1977. It was a white coupe with red interiors. The 1977 model also marks the first time Chevrolet provided an option for cruise control.

In 1978, for the first time, a Corvette was chosen as the pace car for the Indianapolis 500. The Corvette C3 was black over silver metallic with red pinstripe separating the colors. A limited edition replica of the Indy Pace Cars was offered for purchase and made up 15 percent of total production. For the replicas, the cross-flag emblem was replaced a with a special anniversary emblem.

This is definitely one of the more surprising facts about Chevrolet Corvettes.

Despite offering little features compared to previous models, the 1979 Corvette sold 53,807 units with a base price of $10,200.23. This model sold more units in one year than any Corvette before or since and it is unlikely that the record will be broken anytime soon.

In 1981, for the first time Corvette models were built at the same time in two locations as mid-year production transferred from St. Louis, MO to Bowling Green, KY.

After Zora Arkus-Duntov retired from Chevrolet in 1975, David McLellan the chief Corvette designer took over engineering decisions for the next generation of Corvette. The C4 Corvette departs in some ways from the C3. The C4 Corvette has rear bumpers and panels made from molded plastic rather than fiberglass. It used “unibody” assembly rather than separate body-on-frame construction. The new Corvette also came standard with an electronic dashboard with a digital liquid crystal display dash. 1983 Corvettes never sold to the public. Production & quality issues postponed the debut of the C4 generation making Chevrolet skipping the year.

In 1990, the Corvette ZR-1 released and was only available as a fastback coupe. The vehicle had great capability in acceleration and handling as well as the ability to push to 375 hp. The cost for this performance, however, made the ZR-1’s price $58,955 (about double the non-ZR-1).

For 1990 models of Corvette, airbags on the driver’s side become a standard feature.

In 1992, the C4 Corvette came with a new 300 bhp 5.7-liter V8 engine that performed so well it was given the LT1 designation. The engine allowed for reverse-flow cooling which made it possible for a higher compression ratio of 10:5:1. Along with the engine, these corvettes came with a new distributor, and a form of traction control deemed Acceleration Slip Regulation (ASR).

For the Corvette’s 40th Anniversary in 1993, an optional anniversary package was available for all models with Ruby Red metallic exterior and Ruby Red interior.

In 1996, despite it being the last year of C4 production, Chevrolet offered special Corvette models and options. The special editions included the Collector’s Edition with Sebring Silver paint job and a Grand Sport with blue paint and a white stripe as well as an LT-4 engine. Regarding options, customers could receive OBD II (On-Board Diagnostics), run-flat tires and manual transmission.

In the 1990’s Russ Mclean was selected as a manager of the Corvette platform. He had a reputation at GM for fixing quality/cost issues. With GM suffering through financial difficulties, Mclean decided to isolate the Corvette team making them independent of the GM structure. Despite the approval to develop the C5 Corvette, GM wanted to end the Corvette program. Mclean kept that news only to select few and continued working on the C5. He left Corvette team in 1996, but the success of the 5th generation justified the rebellious efforts.

In 1997, the Corvette saw its most radical redesign since its debut in 1953. The vehicles had hydroformed box frames, rear mounted transmissions as well as a wider wheel base. Continued technological advancement and public feedback helped extensively in the design and engineering process. The new C5 Corvette generation lasted from 1997 to 2004.

The C5 Corvette had 1,500 fewer parts than the C4. The decrease in mechanisms greatly aided designers in reducing shakes and rattling that afflicted its predecessor. The choice also made production and maintenance more manageable as well as cut back the weight on the vehicle.

Only a coupe model of the C5 Corvette was available in 1997, despite the new design being built from square one to be a convertible. The convertible edition, however, did return the following year. A separate trunk with outside admission was available on the Corvette Convertible for the first time since 1962.

The introduction of the Z06 took place in 2001. It was a successor to the ZR-1 and named after the Z06 version of the C2 Corvette. The vehicle had 385 HP LS6 V8 and could reach a top speed over 170 mph. The Z06 also included new front fascia grilles that allowed better airflow to the engine air intake.

The C5 generation was well received and sales were relatively strong. Still, there was room for changes. In 2005, the C6 generation of Corvette debuted and lasted until 2013. Some alterations included exposed headlights (the first for Corvette since 1962), reduction in body overhangs and improvement in interior quality.

Although the C6 Corvette was a new design and the marketing displayed it as entirely new, the vehicle was more of a modification of the C5 than a complete overhaul like previous generations. The press noted the similarities. Car & Driver, for instance, stated the C6 was an “evolution” of the C5.

After a year off, the Z06 made a return in a new redesign. The Corvette contained a new 7.0L block V8 that gave 505 hp and 470 Ib. Ft. of torque. The vehicle had the largest small block that GM ever produced at the time. Other additions included featured aluminum chassis and the use of dry sump lubrication.

#5 – The Better Late Than Never

The C7 Corvette began development in 2007. Originally it was supposed to be released in 2011 but was introduced to the market in 2014. It was first seen by invitation only reveal in Detroit January 13, 2013. The vehicle was used later that year as a pace car in the Indy 500 driven by Jim Harbaugh, the San Francisco NFL coach.

As of 2018, the C7 generation of Corvette is the current generation of the vehicle. For the C7, the Stingray title has returned. It contains an LT1 V8 engine with 460 hp making it one of the most powerful engines ever used in a standard Corvette. Along with the engine, an aluminum frame became the standard for all models.

#3 – GM Looking For Younger Base

GM feared that prospective customers viewed the Corvette as a sports car for the older generation. John Fitzpatrick, Corvette’s marketing manager, wanted to promote the C7 as a young man’s car in alignment with GM’s effort for a younger crowd.

Along with the standard edition, Chevrolet announced the return of the Z06 for 2015. The vehicle contains an LT4 supercharged 6.2L aluminum V8 engine, automatic transmission and a convertible option.

For 2017, Chevrolet introduced the Grand Sport model of the C7. It is a tribute to the 1963 purpose built Corvette race cars.