50 Amazing Facts About The A-10 Thunderbolt 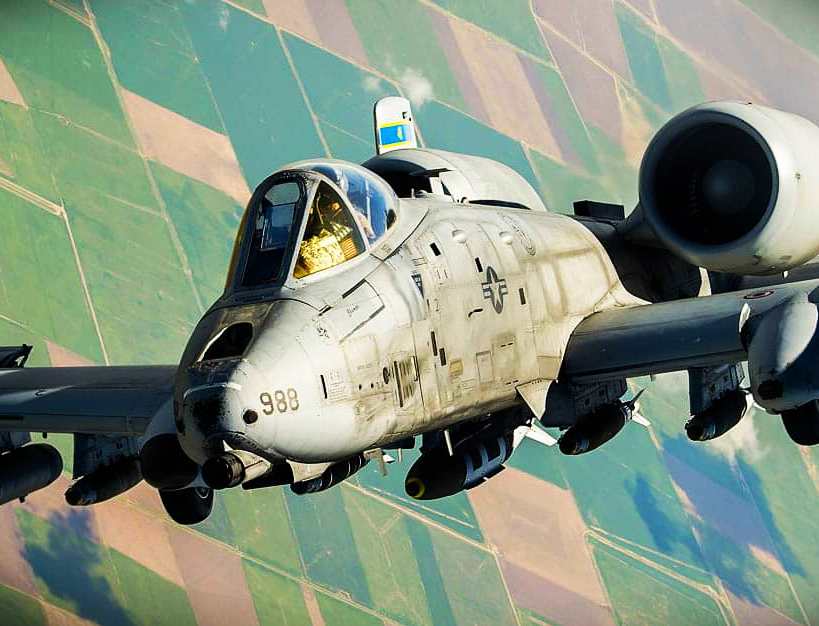 50. The United States Air Force only has one aircraft dedicated solely to air-to-ground support, the A-10 Warthog. Known for its survivability, ease of maintenance and brutally powerful machine gun protruding from its nose, the A-10 has won the hearts of any ground troops it has assisted over the years.

49. Because of it’s cumbersome appearance the A-10 was nicknamed “Warthog”.

Now, after many years of successful missions, the “Warthog” is an affectionate nickname that praises the aircraft’s longevity and grittiness.

48. The A-10 cockpit and flight control systems are surrounded by 1,200 pounds of protective armor called the “bathtub”. It’s capable of withstanding 50-cal bullets or 23mm armor-piercing rounds.

47. The 30 mm GAU-8/A Avenger sits in the front of the aircraft, with the barrel protruding from the nose of the A-10. It is the heaviest automatic cannon ever mounted on an aircraft.

When maintenance is done and the gun is removed from the aircraft, a support is wedged under the tail to keep the nose from tipping up.

45. Some A-10 Thunderbolt’s have a ‘false canopy’ painted on the belly of the aircraft.

44. The A-10’s General Electric TF-34-GE-100 engines are mounted high, above and behind the wings. This positioning gives them protection from ground fire.

43. The Gatling gun is designed to fire high explosive incendiary and armor-piercing depleted uranium rounds at a rate of 3,900 rounds per minute. 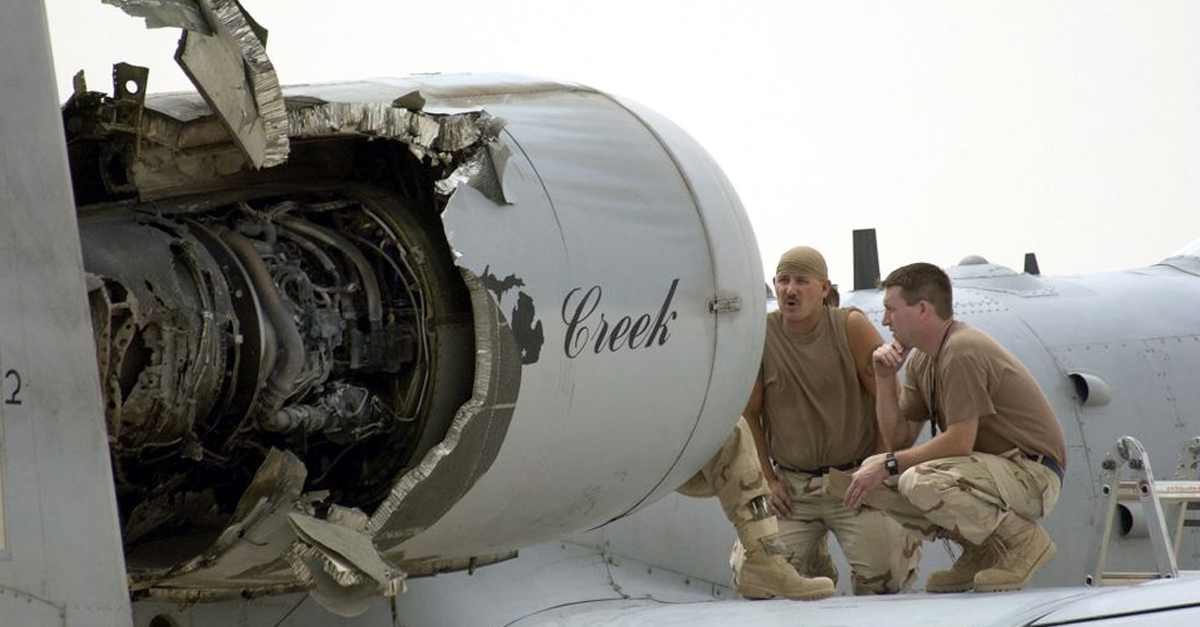 42. There is an A-10 Thunderbolt monster truck used by the Air Force for marketing purposes. It travels around the U.S. and has become a fan favorite at air shows.

41. The Thunderbolt II gets its name from the P47 Thunderbolt, used in WWII. Both Thunderbolts are/were ground support aircraft. 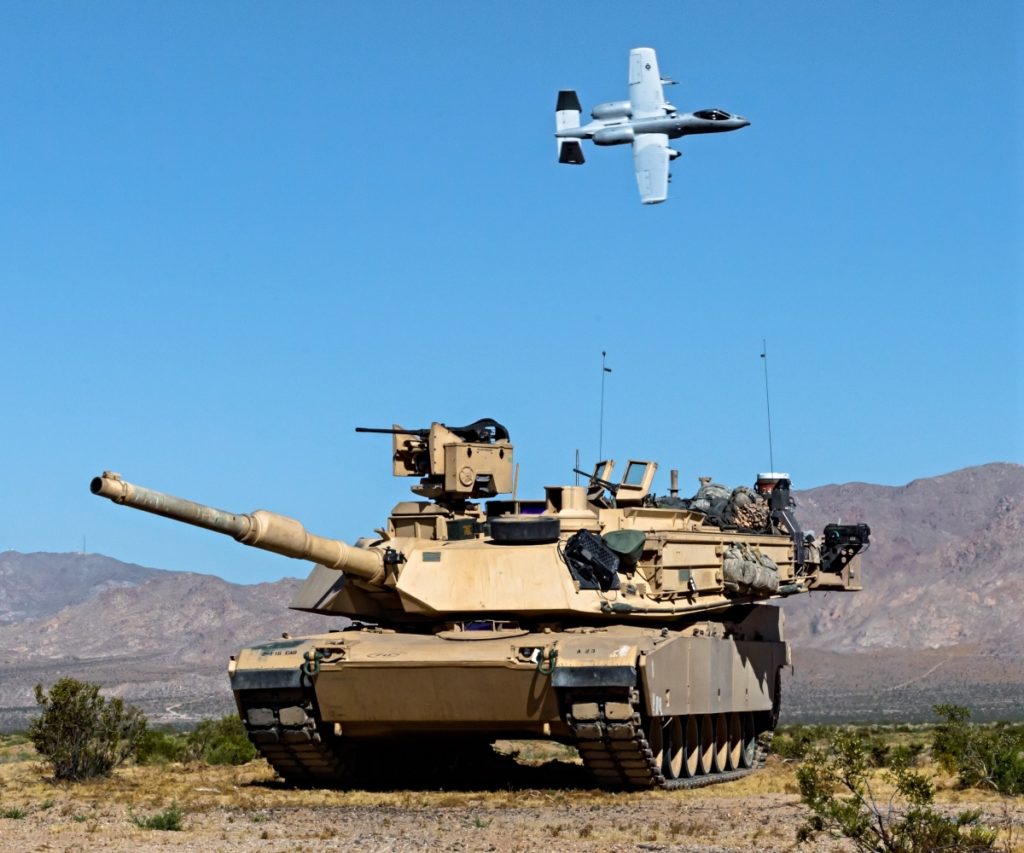 40. It is so well armored that it can fly through super-cell thunderstorms – the Air Force uses the A-10 to monitor severe weather systems.

This combined with its long loiter time give the Warthog its ground support capability that earns so much praise.

38. There is a special vehicle created just for loading ammunition into the A-10 Thunderbolt. It’s called “The Dragon”.

37. The Gatling gun heats up so fast that pilots can’t fire for more than a few seconds at a time. Doing so would overheat the barrel and render it ineffective. 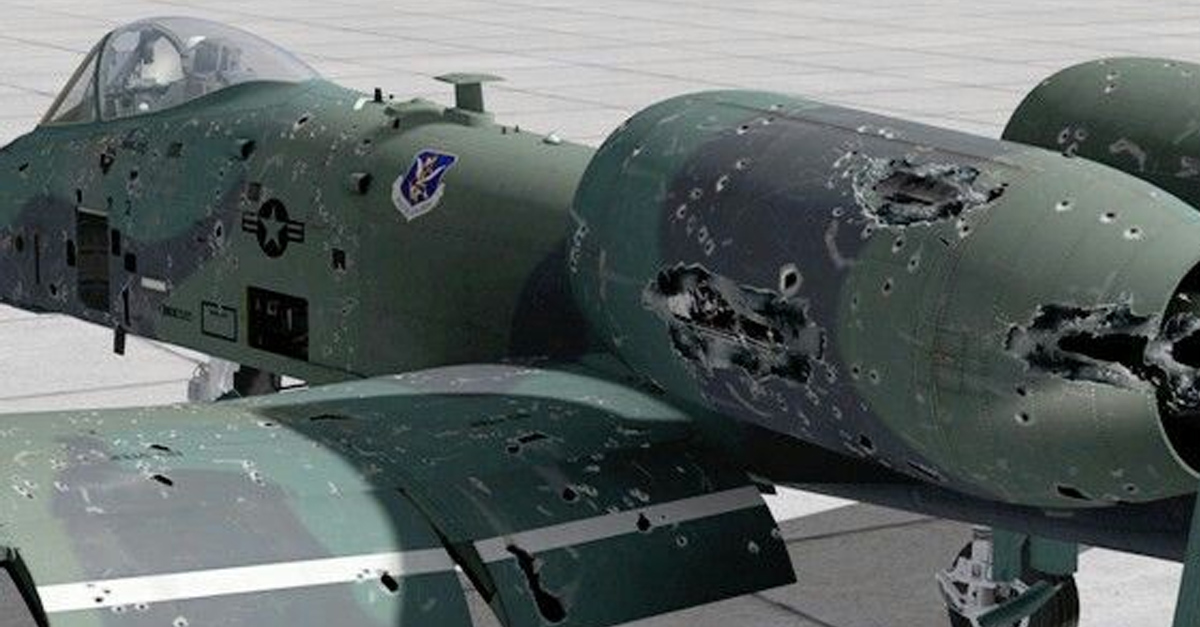 36. The landing gear, engines, vertical stabilizers and some other parts on the A-10 are left and right interchangeable – meaning they can operate on either side.

That allows it to be serviced at a forward location and put back in combat much sooner than other aircraft.

35. The A-10 Thunderbolt’s straight, large wings and wide wheelbase allow it to take off and land from a short runway, giving it the ability to land as close to the front line of battle as possible.

34. The A-10 carries more weight in weapons than it weighs itself. The Thunderbolt weighs 12 tons and, including the GAU-8/A cannon, carries a maximum of 13 tons of armament.

33. The A-10 was built to survive. The hydraulics systems are double-redundant and a backup mechanical system controls the plane if the hydraulics are lost.

During its service in the war the A-10 was responsible for destroying 900 Iraqi tanks, 2,000 other military vehicles and 1,200 artillery pieces in addition to two air-to-air kills.

31. In 1999, an A-10 assisted in the rescue of a downed F-117 pilot in Kosovo. The A-10 provided ground support while three helicopters executed the rescue mission.

In 1973, Secretary of Defense James Schlesinger said he would remove a cap on the total amount of wings (think hangar, not wings of a plane) for Air Force fighters if Air Force General George S. Brown, then the USAF Chief of Staff, would support the A-10 for years to come.

28.  One of the pieces of armament the A-10 carries is the AGM-65 Maverick air-to-ground missile. Each missile weighs 670 pounds and can destroy a tank in a single shot.

27. The A-10 is an all-weather, all-day aircraft. They are equipped with Night Vision Imaging Systems and a goggle-compatible seat in the cockpit.

26. Davis-Monthan Air Force Base, Ariz., received the first-ever production A-10 in October 1975. It didn’t see combat until over 15 years later.

25. The A-10 has seen combat in every major conflict the United States’ has been involved in since 1991.

24. One of the A-10s defining traits is its survivability. A honeycomb panel design make up the leading edges of the wing and tail, making them more resistant to battle damage.

23. The front landing gear retracts from under the wings in an offset position, with the rear wheels in line with the fuselage. This set up allows room for the massive machine gun in the nose.

22. Even when the wheels are retracted, they protrude outside of the nacelle just a bit. This way if the A-10 has to land with its gear up, it will limit damage to a degree.

21. The left and right ailerons on the A-10 are larger than most any other aircraft. This gives the Thunderbolt more maneuverability than its air-to-ground assault counterparts.

20. An NFL player once piloted the A-10 in the Persian Gulf War. Chad Hennings was a defensive lineman with the Dallas Cowboys after he served in the Air Force.

19. The Gatling gun in the A-10 Thunderbolt fires bullets the size of a beer bottle out of a gun that’s bigger than a Volkswagen Bug.

18. The cannon creates so much smoke while it’s being fired that it could choke out a jet engine.

The engines, in original testing, could not get enough oxygen while the cannon was firing so a special combustion chamber was created to keep the engines running while the gun was firing.

This impressive display caused the Iraqi soldiers to refer to the A-10 as the “Cross of Death” – because of the plane’s semblance to a cross from underneath.

16. The Air Force nearly chose the Northrop YA-9A over the A-10. The deciding factor was that the engines, mounted to the root of the wings, and the single tail were too vulnerable.

14. Damaged wing skins can be replaced relatively easy in the field – even with makeshift materials. The production skins aren’t load bearing which means replacing them is simple.

13. In 2003, Capt. Kim Campbell’s A-10 was hit by ground fire and took on extensive damage to the horizontal stabilizer, starboard vertical stabilizer, aft fuselage, and engine. She was able to land the plane safely after switching controls to manual and manually controlling the plane.

12. The A-10’s cockpit is outfitted with a bubble canopy that allows 360-degree views of the battlefield. Bombs are released using precise technology but the cannon, for the most part, is fired the good old fashioned way – with a pair of eyeballs.

11. The Warthog’s fuel cells are self-sealing and are protected by anti-explosion foam on the inside and the outside.

9. A-10s had a mission capable rate of 95.7 percent in the Gulf War across its 8,100 sorties. That’s pretty good considering that other active Air Force aircraft, like the B-1 bomber, have an availability rate below 50 percent.

8. As of 2015, the A-10 Thunderbolt has flown about 11 percent of all United States Air Force sorties against ISIS in Syria and Iraq. That’s a reduction from what it flew in Operation Iraqi Freedom and in Afghanistan – about 32 percent of the combat sorties in both theaters.

7. The A-10’s secondary role is to provide forward air controller support. In this role, the A-10 pilot would direct other attack aircraft in ground supporting roles – all planes used for this tactic are referenced as OA-10.

6. The A-10A single-seat variant was the only model ever produced. In 2005, an upgrade program was implemented to give all A-10 current avionics and precise bombing technology – these updated models are now known as A-10C.

4. The recoil from the cannon is so powerful that it affects the airplanes’ trajectory. Therefore, the GAU-8/A 30mm cannon was installed slightly off-center to offset that change caused by the recoil.

The A-10 can operate underneath 1,000-foot ceilings with 1.5-mile visibility. This combined with its long loiter time give the Warthog its ground support capability that earns so much praise.

3. The front landing gear, which is offset from the center because of the Gatling gun’s massive recoil, causes the A-10 to have an unequal turning radius. Turning to the right on the ground takes less distance than turning left.

2. The A-10 was designed with maintenance and turn-around time during battle in mind. The engines being located high on the plane allow them to continue running while receiving maintenance in a forward location.

1. Because the A-10 Thunderbolt II flies so low to the ground, paint schemes for camouflage are more important here than with other aircraft.

Multiple variations have been tried – a “peanut scheme” of sand, yellow and field drab, a black and white version for winter work and a brown, green and tan version. Many A-10 Warthogs have shark teeth or a warthog head painted on the nose of the aircraft.