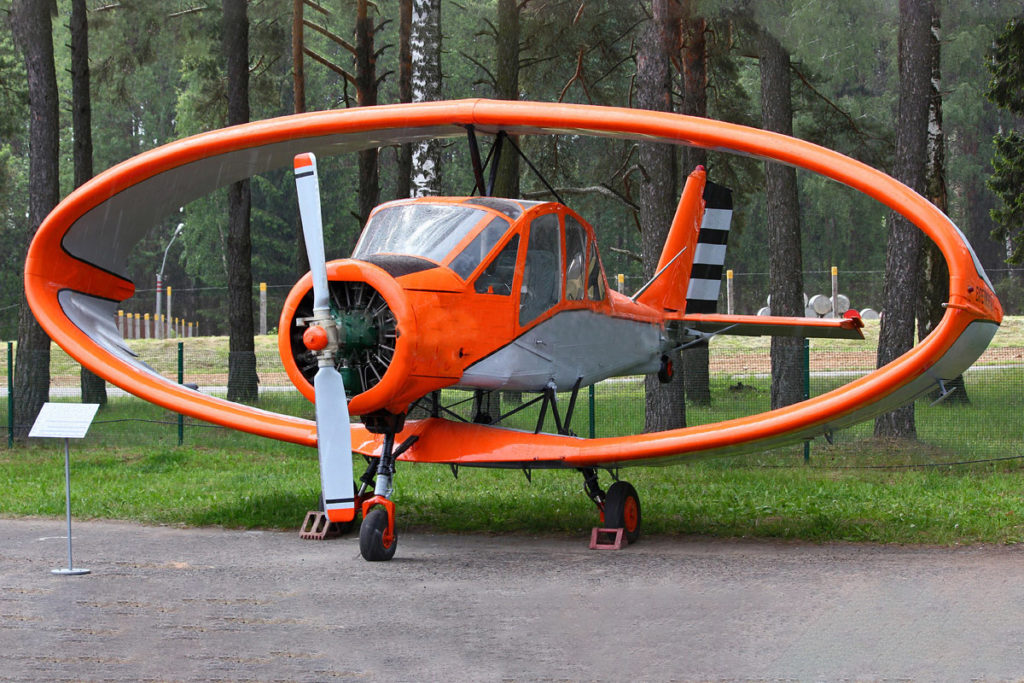 The first of our weirdest aircraft designs is the Edgley EA-7 Optica. It is a British aircraft made for low-speed observation work.

It is intended as an inexpensive alternative to helicopters. Its first flight was in December 1979.

At first you might think this is an unusual truck, but “The PZL M-15 was a jet-powered biplane designed and manufactured by the Polish aircraft company WSK PZL-Mielec for agricultural aviation.

In reference to both its strange looks and relatively loud jet engine, the aircraft was nicknamed Belphegor, after the noisy demon.” Definitely a worthy selection on our “Weirdest Aircraft Designs Of All Time” list, but wait, there’s more.

Here is the third on our “15 weirdest aircraft designs of all time!” The Tupolev Tu-144 is a Russian supersonic 55 passenger airliner that was in operation from 1968-1999.

This largely forgotten aircraft was introduced into passenger service in 1975, but was removed less than three years later following a second crash.

The next weirdest aircraft designs of all time lives up to the title. Not to much info on this interesting looking plane. Using the closed wing design it appears to be custom made but sure caught our attention.

If you’ve seen this one before, drop us a line. Until then, we’re just going to assume it is a predecessor to the Dyson fan that moves air without blades. You know the one…

This diesel-electric tilt-wing helicopter seeks to address the shortcomings of current aircraft and take the technology to the next level. The next-generation of tilt-rotor aircraft will be much more reliable, fuel efficient and capable of hauling even heavier loads.

The Korabl Maket also known in English as the Caspian Sea Monster, was a Soviet experimental aircraft developed by the Central Hydrofoil Design Bureau in the 1960s.

Its first flight was in October 1966. It was destroyed in 1980. But not before this wild shot was captured and shared with the world. We wonder what it would be like if the company decided to make experimental unusual lawn mowers instead.

One of NASA’s coolest aircraft, this technology demonstrator (1984 – 1992) was way ahead of its time. The X-29 was known as a “three surface aircraft,” meaning it drew lift from the front canards, forward-swept wings, and aft strake control surfaces, rather than just traditional wings. Employing this three-surface longitudinal control significantly reduced trim and wave drag. To fight instability, the rear strakes provided trim whenever the plane’s center of gravity shifted. The net effect was to create one of the most ultra-maneuverable aircraft that ever existed.

This unique configuration, combined with a center of gravity well aft of the aerodynamic center, made the craft inherently unstable. Stability was provided by the computerized flight control system making 40 corrections per second. The flight control system was made up of three redundant digital computers backed up by three redundant analog computers; any of the three could fly it on its own, but the redundancy allowed them to check for errors. Each of the three systems could “vote” on their measurements so that if one malfunctioned it could be ignored. It was estimated that a total failure of the system was as unlikely as a mechanical failure in an airplane with a conventional arrangement. Read more about military aircraft.

The X-48C Hybrid Wing Body aircraft is one of the newest, most advanced unmanned aircraft in the world, and it’s based at Edwards Air Force Base.

Of all the weirdest aircraft on this list, this one is definitely the weirdest looking but probably the most functional out of all of them! We wonder what odd muscle cars Nasa would make if they had the opportunity.

Ever heard of a ‘unmanned wingless VTOL aircraft’? Well, that’s exactly what the Dornier Aerodyne set out to be.

Produced in the late ’60s, it’s first flight was in ’72, as a part of the German army. As I’m sure you can imagine…it was less than useful.

This may look like two P-51 Mustangs stuck together, which is somewhat fitting. It is called the North American F-82 Twin Mustang. This aircraft was the last American piston-engine fighter produced for the US Air Force.

It was supposed to be used for World War 2, but the war ended before it was operational. Its first flight was in 1945 and retired in 1953.

Here is an aircraft industry fact most people don’t know. The Lockheed Martin P-791 was an experimental hybrid airship that had its first flight in January 2006 at the US Air Force Plant 42 in Palmdale, CA.

This is a real aircraft that actual took to the skies. Can you imagine just hanging out and seeing this monstrous cloud fly overhead?

The Northrop XB-35 was an experimental heavy bomber aircraft developed for the US Air Forces during World War 2.

Its first flight was in June 1946. It was cancelled in 1949. We wonder if this military aircraft is for sale to civilians.

The third of our very strange types of aircraft is one of the oddest. The M.39B Libellula is a twin-engine British experimental craft that served primarily as a military plane, though it had incredible potential for civilian purposes as well. First flown in 1945, it possessed incredible endurance and range for such a relatively lightweight transport/bomber.

Uniquely, it was the first heavy bomber specifically designed to land on aircraft carriers. The Libellula was able to deliver a 2,000-pound payload out to 1,600 miles and cruise at 400 mph… quite an impressive list of specs for that day and age. As a civilian plane, it would have served as an incredibly powerful medium commuter plane.

Though not technically a WWII aircraft, we thought we’d include it. This American experimental jet fighter from 1948 would probably be better classed as a guided cruise missile. Dropped from the bomb bay of a Convair B-36 bomber, the McDonnell XF-85 Goblin’s first-generation jet engine was supposed to start in mid-air. And it did so in testing… at least most of the time. The purpose behind this so-called “parasite fighter” was to expand the range of fighter aircraft of the era drastically.

In the 1950s and early 1960s, the U.S. military and NASA experimented with designs that resembled flying saucers. One of these LRV projects was declassified in 1999. If you saw a flying disc back in the day near one of these bases, it might have witnessed one of the strangest aircraft the military ever built.