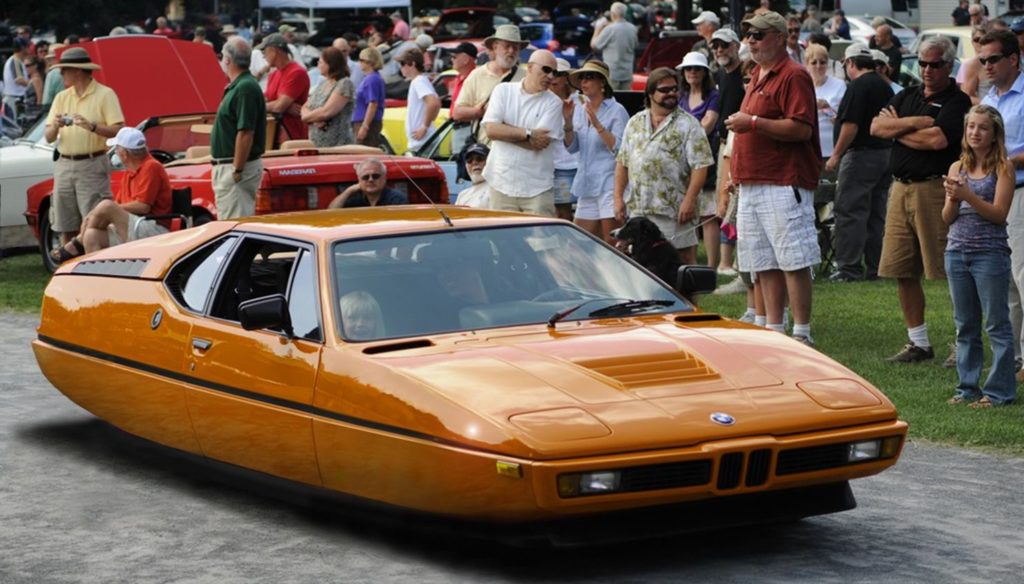 One of our strange old cars is this mini hot rod wannabe. Either under the car directly in front of it, or to outer space. There is no in between on this one – this little guy was designed for those two purposes only. But jokes aside, this one looks like a lot of fun. Can you picture the looks on peoples faces staring at you go by looking back them from inside your bubble canopy! I mean, too cool. This cool hot rod was originally a Volkswagen Beetle.

The next of our strange old cars is a one-of-a-kind Pontiac GTO, which features custom everything. From the doors on back is factory, but everything about the front end is a homemade project. An extended hood slides out over two axles and there’s ample trunk space in the front where the engine also lives. What a wild ride… We now wonder if someone could cut the wheels down to three and construct a cool custom trike?

Quite possibly the lowest hot rod in human history, the next of our strange old cars is this custom VW Bug titled “The Woodruff Special” is a head-turner! It’s owned by Jocke Gustavssons. This awesome car mod makes the vehicle sit so low the front suspension sits above the hood. This car has been chopped, channeled, drivetrain raised & body dropped about as far as you can go. Any lower & this thing would be underground.

Take a look at these next photos on our most strange old cars list. How are we feeling about this modification of the classic 1980 BMW M1? The owner, who lives in Massachusetts, added a body plate that extended beyond the car’s original frame in order to make it look like there is invisible tires. The way it is designed, we see why people get it confused for one of the strangest aircraft ever made rather than a vehicle. It’s a pretty unique look!

What an unusual truck. This odd Mazzy Hot rod was originally converted from a Russian Soviet Minsk Auto Zavod Truck.

Many people call this vehicle the ugliest car ever built. Well, they might right. The Aurora was the brainchild of Father Alfred Juliano, a Catholic priest. How it made it to actual production – we will never know.

I’m not sure what to call this exactly. It is hard to figure out. This engine is MASSIVE! It produces plenty of power for sure. It also carries a lot of weight (check out the front wheels straining under the load). But I would not be too quick to rush to judgment, my friends. While this engine is large and in charge, and the car is dated, it does look cool!

No, that is not some unusual lawn mower. It is a car called the Manta Ray. It Inspired by Harley Earl’s 1951 XP-8 Le Sabre, the Manta Ray was a on-of-a-kind custom build from the imagination of Glen Hire and Vernon Antoine.

This is what fire department’s awesome old school trucks used to look like, folks. The men who ran toward the fire instead of away from it went there in this awesome, antique, glass roof, station wagon style fire truck.

Overall, the Czech Republic had different standards than most of the world, but this firetruck really brings home that truth. It does offer a cool window (literally) to see into the workings of the firemen. The old school hoses, the ladders on top – it’s perfect.

Okay, so this hot rods not afraid to be different, We’ve all been to one of those country things restaurants with license plates on the wall and funky signs. However, what happens when that restaurant falls in love with a vehicle? Well, you get this hot rod, that’s what. Check out the rat gnawing on the air filter up top, and the snake slithering his way across the front grill.

This is the 1958 Ford Edsel Pacer Snowplow. The Ford Edsel Pacer 2-door sedan was a classic car for all of one year. But even though it didn’t last in Americana – this snowplow version most certainly is going to be ingrained in our memory forever and ever. This version is running the streets of northern New Mexico.

Originally finished in gold lacquer and powered by a 232 CI Studebaker V-8, the car currently wears a light shade of pink and packs a dual-quad Cadillac V-8 and 3-speed manual transmission propulsion team.

Stewart Warner instruments and a Plymouth speedometer sit in the dash, and the cone-shaped steering column is topped with a sectioned 1953 Lincoln steering wheel that waits for its next owner to engage in an authentic Jet Age custom experience.

Hello operator, will you please connect my call? Ha! If not, no problem. We will just drive there in my modified phone booth hot rod and meet in person. Why? Because I have a phone booth hot rod that’s why! You don’t need an operator with this thing. It makes you the operator. And while we are not sure how the seating situation works (might be a bit cramped or standing room only if you are tall), it doesn’t matter.

Oooh, Barracuda! Did you know that Tiburon is the Spanish word for ‘shark’. Yeah, neither did we. Well – if you look close enough at the hood you can see the word “shark” written there. so that’s a dead giveaway to this odd muscle car.

Fun fact: The Covington Tiburon is roadster with a fiberglass body which is structured around the powertrain from a 1971 Renault R10. It’s been coined “the most streamlined car in the world.”

Streamline. Elegance. This is one of those odd and rare older cars you don’t see everyday. This was created during the era of custom, swooping vehicles. But the Norman Timbs Special was a legendary vehicle that over three years to finish. Norman Timbs, an automotive engineer, worked with Preston Tucker on the Tucker Automobiles.