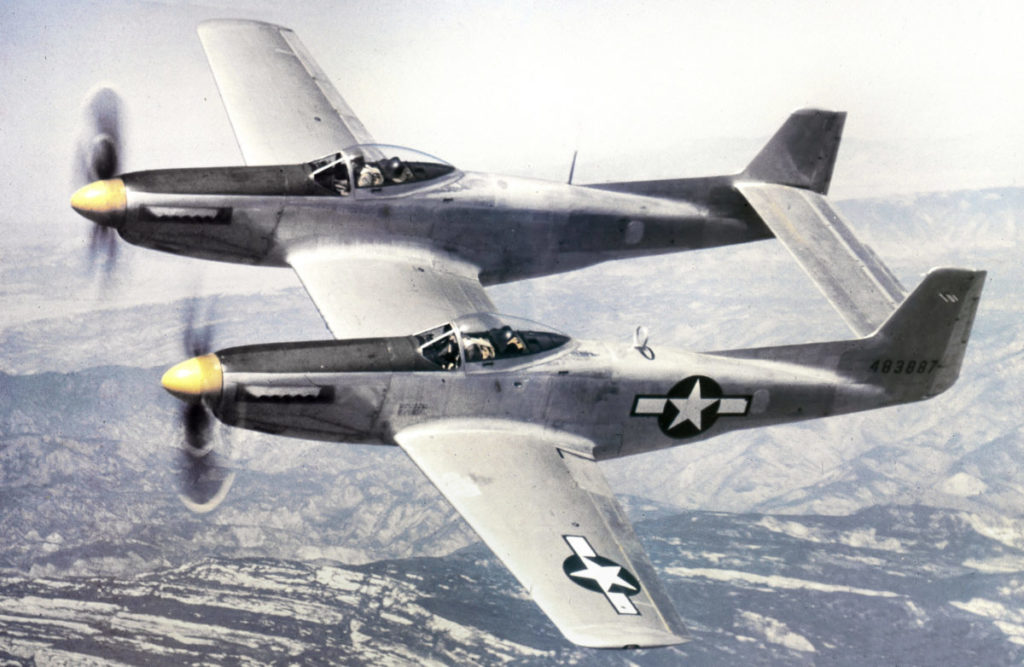 Here is the first of our “10 Very Strange Types Of Aircraft From World War 2.” The Vought V-173 also known as the Flying Pancake was an American experimental test aircraft built with the Vought XF5U ”Flying Flapjack” US Navy fighter ship program during World War 2.

This may look like two P-51 Mustangs stuck together, which is somewhat fitting. It is called the North American F-82 Twin Mustang. This aircraft was the last American piston-engine fighter produced for the US Air Force.

It was supposed to be used for World War 2, but the war ended before it was operational. Its first flight was in 1945 and retired in 1953.

The third of our “Very Strange Types Of Aircraft From World War 2” is one of the oddest. The M.39B Libellula is a twin-engine British experimental craft that served primarily as a military plane, though it had incredible potential for civilian purposes as well. First flown in 1945, it possessed incredible endurance and range for such a relatively lightweight transport/bomber.

Uniquely, it was the first heavy bomber specifically designed to land on aircraft carriers. The Libellula was able to deliver a 2,000-pound payload out to 1,600 miles and cruise at 400 mph… quite an impressive list of specs for that day and age. As a civilian plane, it would have served as an incredibly powerful medium commuter plane. These weird aircraft also remind us of some odd muscle cars.

The Northrop XB-35 was an experimental heavy bomber aircraft developed for the US Air Forces during World War 2.

This is one of strangest aircraft ever made. The Blohm & Voss BV 141 was a German World War 2 tactical reconnaissance aircraft. Its first flight was in February 1938.

The structural asymmetry is its most notable feature, especially as this aircraft never actually did too much during the war. Other than create headlines due to its oddness.

You don’t get high-tech jets like the F-22 Raptor without starting somewhere. Though not technically a WWII aircraft, we thought we’d include it. This American experimental jet fighter from 1948 would probably be better classed as a guided cruise missile. Dropped from the bomb bay of a Convair B-36 bomber, the McDonnell XF-85 Goblin’s first-generation jet engine was supposed to start in mid-air. And it did so in testing… at least most of the time. The purpose behind this so-called “parasite fighter” was to expand the range of fighter aircraft of the era drastically.

This is actually a glider designed by Antonov, a Soviet aircraft manufacturer. The way the A-40 Krylya Tanka was supposed to work is it cradled a T-60 Light Tank, and then the tank would drop its wings once it landed on the battlefield. Due to the T-60’s drag and slowness of the glider, the Soviet Union abandoned the project. We wonder if it could carry an M1 Abrams Tank?

Despite reaching speeds of 410 mph, the U.S. Military decided to look into jet engines following World War II. As a result, they retired the project.

In 1939, United States Army Air Corps put out an R-40C proposal for a new aircraft that improved pilot visibility, performance, and armament. Curtiss-Wright answered with the XP-55 Ascender, which had an unconventional design, even for the time. The plane took its first flight in 1943 and had a series of issues.

Since the XP-55 did not outperform conventional aircraft even after it received redesigns plus new jet engines on the horizon, Curtis-Wright canceled the project. Maybe they could shift their talents to making some unusual lawn mowers.

Here is the last of our “Very Strange Types Of Aircraft From World War 2.” Consolidated Aircraft built the PBY Catalina from the 1930s to the 1940s. The United States Armed Forces heavily utilized this amphibious aircraft in every military branch in World War II, along with other nations. In fact, it became one of the most used seaplanes throughout the war. Talk about longevity! Though retired from the U.S. military in 1957 and other nations’ militaries in the 1980s, the aircraft still sees action as a waterbomber by firefighters or commercial operations. Definitely, one of the most extraordinary yet strangest aircraft ever made.