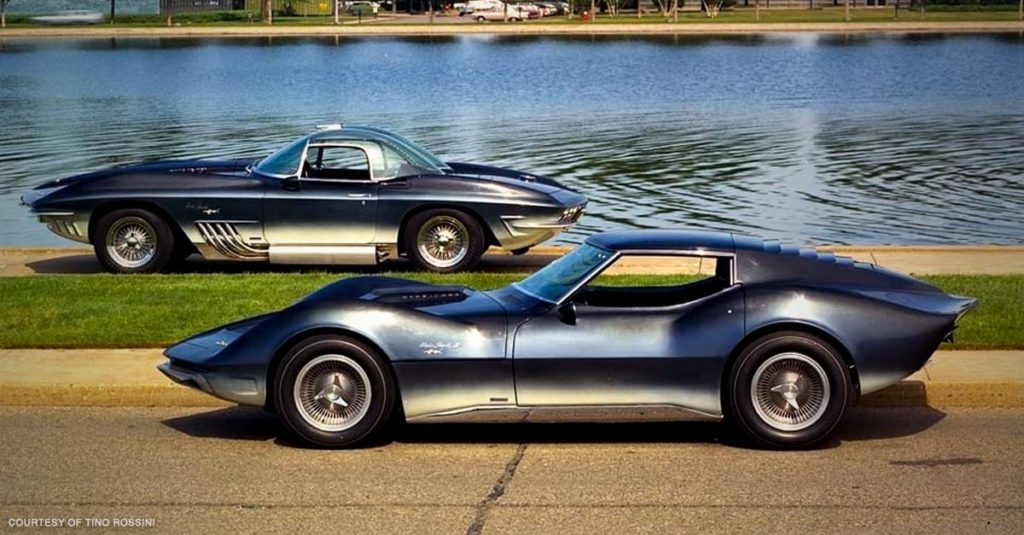 We love all generations of Corvette, from the C1 to the 2022 C8 Corvette Stingray! Here is the first of our “10 Surprising Facts About Chevrolet Corvettes.”  The Corvette’s first production year was 1953. There were only 300 produced and each consisted of white polo exteriors, black canvas soft tops, and red interiors. The base price was $3,498 and it first debuted at the Waldorf Astoria in New York City.

#9 – Chevrolet Disposed Of The Grill “Teeth”

The next on our “Facts about Chevrolet Corvettes” list is that the year 1960 was the final time that Chevrolet included weighty grill “teeth” and tail lights shaped into the rear fenders. We think it is an awesome old school car if you can find one.

The C1 generation of Corvette lasted from 1953-1962. Since the C1 models did not include independent rear suspension, these Corvettes are often referenced as the “solid-axle” generation. Many consider the next C2 generation some the most iconic cars of the 1960s.

The Mako Shark II concept car inspired the 1968 C3 Corvette redesign. The Mark Shark II was introduced in 1965 and carried on the Shark 1 legacy of sporting blue/gray on top paint scheme.

The 1972 Corvette was the last model to include chrome rear and front bumpers, side-fender grills as well as an egg-crate grill. If we found one of these at the right price, we’d love to do a Corvette restoration.

In 1978, for the first time, a Corvette was chosen as the pace car for the Indianapolis 500. The Corvette C3 was black over silver metallic with red pinstripe separating the colors. A limited edition replica of the Indy Pace Cars was offered for purchase and made up 15 percent of total production. For the replicas, the cross-flag emblem was replaced a with a special anniversary emblem. This is one of our favorite years of Chevrolet Corvettes.

In 1990, the Corvette ZR-1 released and was only available as a fastback coupe. The vehicle had great capability in acceleration and handling as well as the ability to push to 375 hp. The cost for this performance, however, made the ZR-1’s price $58,955 (about double the non-ZR-1). Still, this might be one of those cars to bring back because it is a lot of fun to drive.

After a year off, the Z06 made a return in a new redesign in 2006. While not the fastest production car ever made, this Corvette contained a new 7.0L block V8 that gave 505 hp and 470 Ib. Ft. of torque. The vehicle had the largest small block that GM ever produced at the time. Other additions included featured aluminum chassis and the use of dry sump lubrication.

The C7 Corvette began development in 2007. Originally it was supposed to be released in 2011 but was introduced to the market in 2014. It was first seen by invitation only reveal in Detroit January 13, 2013. The vehicle was used later that year as a pace car in the Indy 500 driven by Jim Harbaugh, the San Francisco NFL coach. This might be one of our top American cars of all time.

For 2017, Chevrolet introduced the Grand Sport model of the C7. It is a tribute to the 1963 purpose built Corvette race cars.

If you like these, check out more interesting Corvette facts.