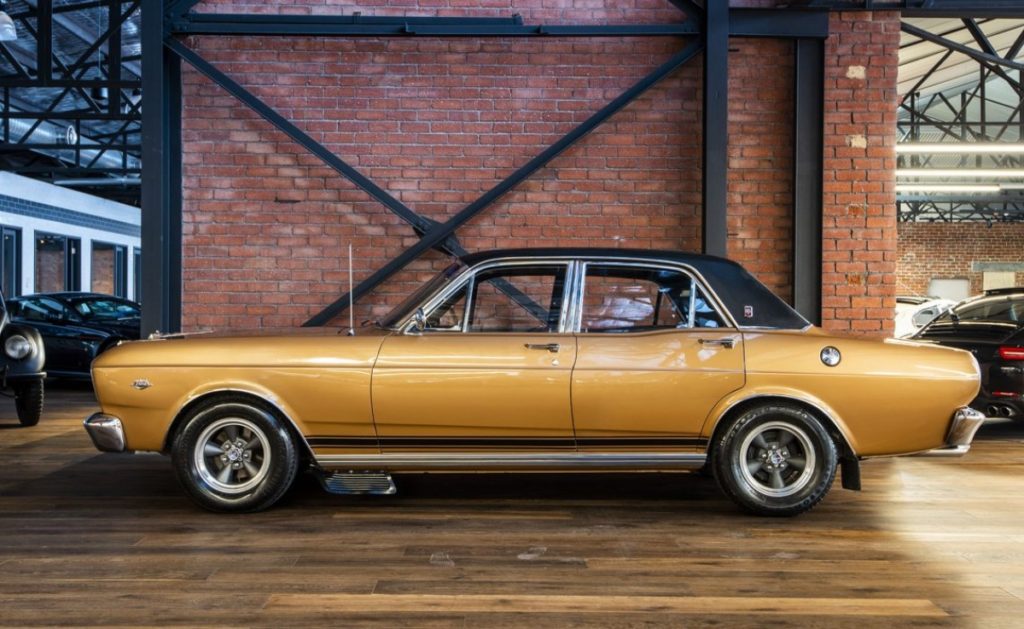 Here is the first of our classic cars of the 1960s. The TR3 is a British sports car produced by the Standard-Triumph Motor Company of Coventry, England between 1955 and 1962. Although the car was usually supplied as an open two-seater, an occasional rear seat and bolt-on steel hard top were available as extras. It is also the first production vehicle that came with standard disc brakes, which were continued on the “TR3A” facelift. Known for its superior braking ability, it became a crowd favorite in the autocross scene.

Quick Fact: Competitors still use the TR3A in the Sports Car Club of America’s (SCCA)E-production class races despite its age.

Next up on our “10 Best Classic Cars Of The 1960s” list is the Iso Grifo. Iso Autoveicoli S.p.A.  manufactured this grand tourer. The car was meant to compete with Ferrari and Maserati GT featuring American car parts supplied by Chevrolet and Ford. It featured a Chevy Corvette small-block 327 V8. What we wouldn’t give to make a barn find discovery with this vehicle in it.

Here is some of the coolest facts about muscle cars. The Land Down Under, Australia, has gotten a variety of unique Fords over the years. The 1967 Ford Falcon XR GT is one such car. Based off the American version of the Falcon, the XR GT was adapted to the harsh conditions in Australia and equipped with a beefy V8 engine that could crank out 200 plus horsepower. Being a relatively small car, that big engine ensured that the Ford Falcon XR GT could get up and go. The simple styling makes the Ford Falcon XR GT an attractive car to this today. Definitely a worthy contender for the best classic cars of the 1960s.

Quick Fact: In 1966, the Falcon XR helped Ford win the Wheels Car of the Year award.

This is one of our favorite awesome old school cars. The Aston Martin DB4 GT Zagato is another one of our classic cars of the 1960s. It was introduced in October of 1960 at the London Motor Show. The DB4 GT was lightened and improved by Ercole Spada of the Zagato factory in Italy. Initially, the factory planned to produce 25 vehicles but the demand was not as strong as they had expected, stopping production at the 20th unit. The most prominent DB4 GT Zagatos, affectionately known by the registration plates they share, 1 VEV and 2 VEV which both raced at the 1961 24 Hours of Le Mans.

Quick Fact: James Bond drove an Aston Martin DB5 in the 1964 film Goldfinger. The vehicle has appeared in several other 007 movies.

The Thunderbird is a top American muscle car. It is a rear wheel drive automobile manufactured in the United States by the Ford Motor Company and has over eleven model generations from 1955 through 2005. The car was redesigned in 1961 with sleeker styling that gave the car a bullet-like appearance. The Thunderbird served as 1961’s Indianapolis 500 pace car and was also featured prominently in US President John F. Kennedy’s inaugural parade. The car entered production for the 1955 model year as a sporty two-seat convertible which Ford called the personal luxury car.

Quick Fact: The Thunderbird Country Club in California also lays claim to being the inspiration for the name of the car.

The Chevy El Camino is one of the most distinctive automobiles on this best classic muscle cars list. While clearly a vehicle with its low profile, the El Camino also features a pickup truck like bed. The 1969 Chevy El Camino SS pictured above is a proper muscle car. The El Camino SS was powered by a 454 V8 and could hit 60 in about 5 seconds, making it quite fast for its day. However, the El Camino is included on this list with a caveat. Rumor has it that this vehicle is one the cars to bring back in the near future for Chevrolet.

This is one odd and rare older car you don’t see everyday. The 300 SL (W198) was the first iteration of the SL-Class grand tourer and fastest production car of its day. Manufactured by Daimler-Benz AG, the direct fuel injected production model was based on the company’s highly successful yet somewhat less powerful naturally aspirated, overhead cam straight 6 1952 race car, the W194. With distinctive gull-wing doors, it was introduced in 1954 as a two-seat coupé and was later offered as an open roadster.

Quick Fact: Over 80% of the car’s total production of approximately 1400 units were sold in the United States, making the 300SL the first Mercedes-Benz widely successful outside its home market.

This is one of the fastest American cars of the 60s. The GT40 is a high-performance racer based on the British Lola Mk6, with the Mk I, Mk II, and Mk III designed and built in England and the Mk IV built in the United States. It won the 24 Hours of Le Mans four consecutive times, from 1966 to 1969 including a 1-2-3 finish in 1966 which Henry Ford II attended himself at Le Mans. The car was named the GT (for Grand Touring) and the 40 representing its overall height of 40 inches. Early cars were simply named “Ford GT”.

Quick Fact: The name “GT40” was the name of Ford’s project to prepare the cars for the international endurance racing circuit, and the quest to win the 24 Hours of Le Mans.

The 250 GTO was designed to compete in GT racing. It was a GT car produced by Ferrari from 1962 to 1964 for homologation into the FIA’s Group 3 Grand Touring Car category, where its rivals would include the Shelby Cobra, Jaguar E-Type and Aston Martin DP214. When new, it cost $18,000 in the United States, with buyers personally approved by Enzo Ferrari along with his dealer for North America, Luigi Chinetti. In May of 2012, the 1962 250 GTO set an all-time record selling price of $38,115,000 at auction. While in October of  2013, a Connecticut-based collector Paul Pappalardo sold chassis number 5111GT to an unnamed buyer for a new record of around $52 million. In 2004, Sports Car International placed the 250 GTO eighth on a list of Top Sports Cars of the 1960’s. It is a superb vehicle, no wonder it continues to be one of the most expensive cars sold at auction.

This is one of the best classic Cars of the 1960s and our favorite. The AC Cobra, sold as the Shelby Cobra in the United States, is an Anglo-American sports car powered by a Ford V8 engine, produced intermittently in both the United Kingdom and United States since 1962. In September of 1961, American automotive designer Carroll Shelby wrote to AC asking if they would build him a car modified to accept a Ford V8 engine. AC agreed, provided a suitable engine could be found. Ford wanted a car of their own that could compete with the Corvette. They just so happened to have a brand new engine which could be used for this project. The Windsor 221 cu in  (3.6 L) engine which was a new lightweight, thin-wall cast small-block V8, two of which were provided to Shelby.

Like these? Check out more iconic cars of the 60’s.